LaTeX is the most used document preparation system in the academia world, derived from the TeX typesetting system, first written by the Legendary Donald Knuth. It is a textual markup language for producing digitally distributed files, ready to be printed. In this article I will not cover the basics of LaTeX. If you want to learn more, you can head over to the excellent WikiBook. If you have any questions you can query the huge database of answered questions at Tex Stack Exchange

I first stumbled into LaTeX as a first year computer science student, I was taking lecture notes in markdown and I wanted to include mathematical notation in them. At first, I've started using MathJax, a cross-browser JavaScript library used to display mathematical notation in browsers; I didn't know anything about the TeX world yet, except that it was the standard for writing books and scientific papers. I kept taking notes in markdown for a couple of months while thinking that LaTeX was somehow complicated and esoteric, until one day. I was in my discrete maths and linear algebra Professor's office to ask some questions related to the courses. Prof. Berarducci, always eager to answer his students' questions, noticed that I was making a mess by mixing up markdown and LaTeX. He began to show me how he writes notes, slides and papers using TeXStudio, and he showed me some tips and tricks to write preludes for projects that make use of a lot of mathematical notation. This is how I've got introduced to the world of writing LaTeX. In less than half an hour I had the knowledge to write not perfect, but at least readable lecture notes in a basic Mathematics course.

TeXStudio, the good and the bad.

TeXStudio is a cross-platform open-source LaTeX editor and IDE. It is a great TeX writing environment if it is your first time approaching LaTeX. The UX is fine, what you have is an almost WYSIWYG editor written in C++ using the Qt GUI toolkit. There are configurable shortcuts for almost everything, from inserting environments to handling tables and files. What you have is also a nicely documented set of menus and buttons, that help you format and insert symbols, graphics, figures, environments into your documents. I've installed TeXStudio from flatpak, the package already contains a LaTeX distribution to compile your documents, which is not included if you install TeXStudio manually on your system. Flatpak-ed applications also have their own advantages and downsides, but I will not focus on discussing them this time.

The downsides of TeXStudio are many. The first one is that it is configured in a single .ini file, making it quite annoying to configure if not from the graphical interface. This also makes it hard to sync TeXStudio settings across different machines. The themes are not so great looking and the PDF viewer has some noteworthy bugs. Another downside is that when you first level up from discovering LaTeX, and begin to take lecture notes in the editor, the default keyboard shortcuts are not friendly for sped up typing. The flatpak install is also quite bulky (1.8 GB since it includes a full LaTeX compiler distribution).

If I have to write code or text for small projects, I use the amazing kakoune editor, if I'm working on big projects where advanced code linting, autocompletion and IDE features are needed Visual Studio Code is my editor of choice. The editor itself is great. There is a good set of available extensions that you can install with a click, it is relatively fast and it provides everything you may need for working with version control in your repositories. There is also support for external debuggers, a full-screen zen mode and it is configured with JSON files (more on configuration in the next paragraphs). A noticeable downside is that it is written in Electron, and here why Electron is considered harmful (but VSCode is still a great text editor).

For my LaTeX documents, I've migrated from TeXStudio to VSCode because I want to use a single text editor for all of my projects. You need to have a working LaTeX distribution with the tlmgr package manager to install the packages that you are going to include in your files.

Here are the extension and config files I'm using for TeX-ing in VSCode: 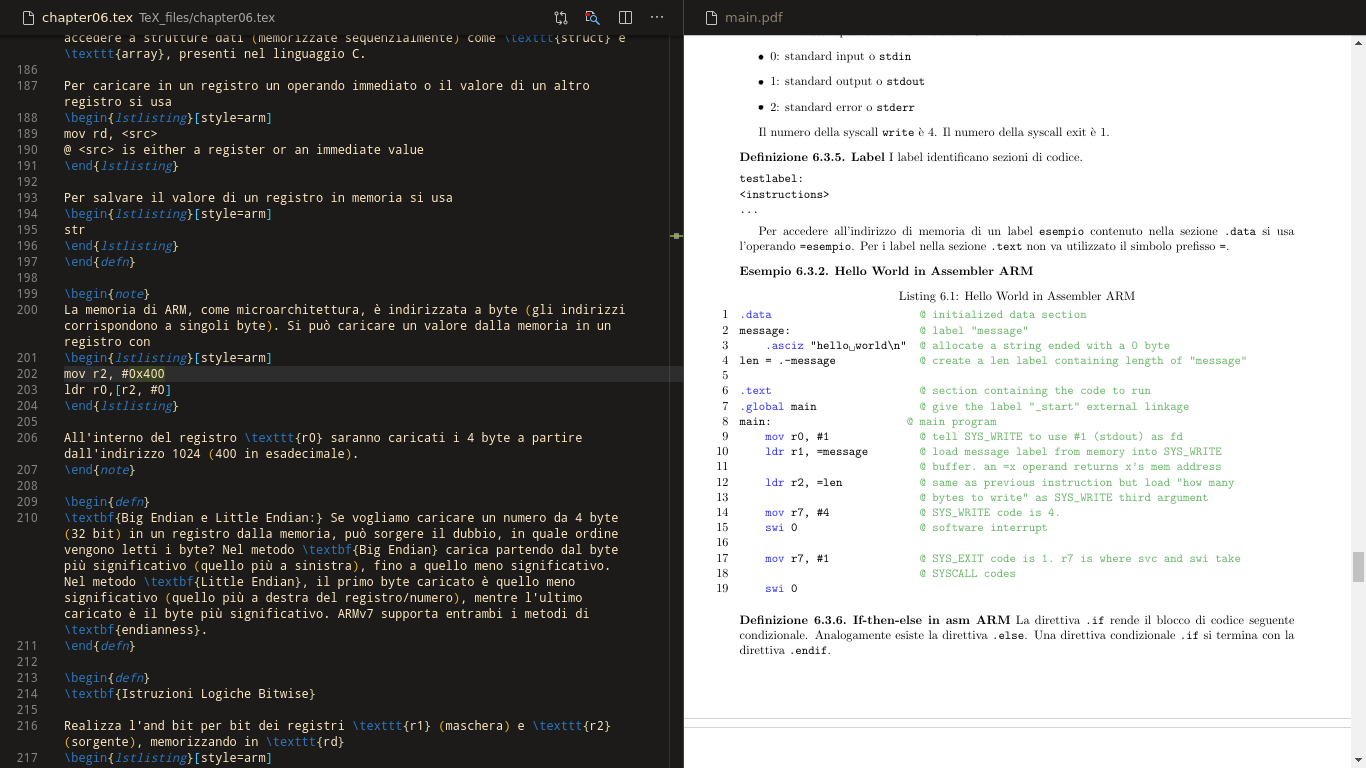 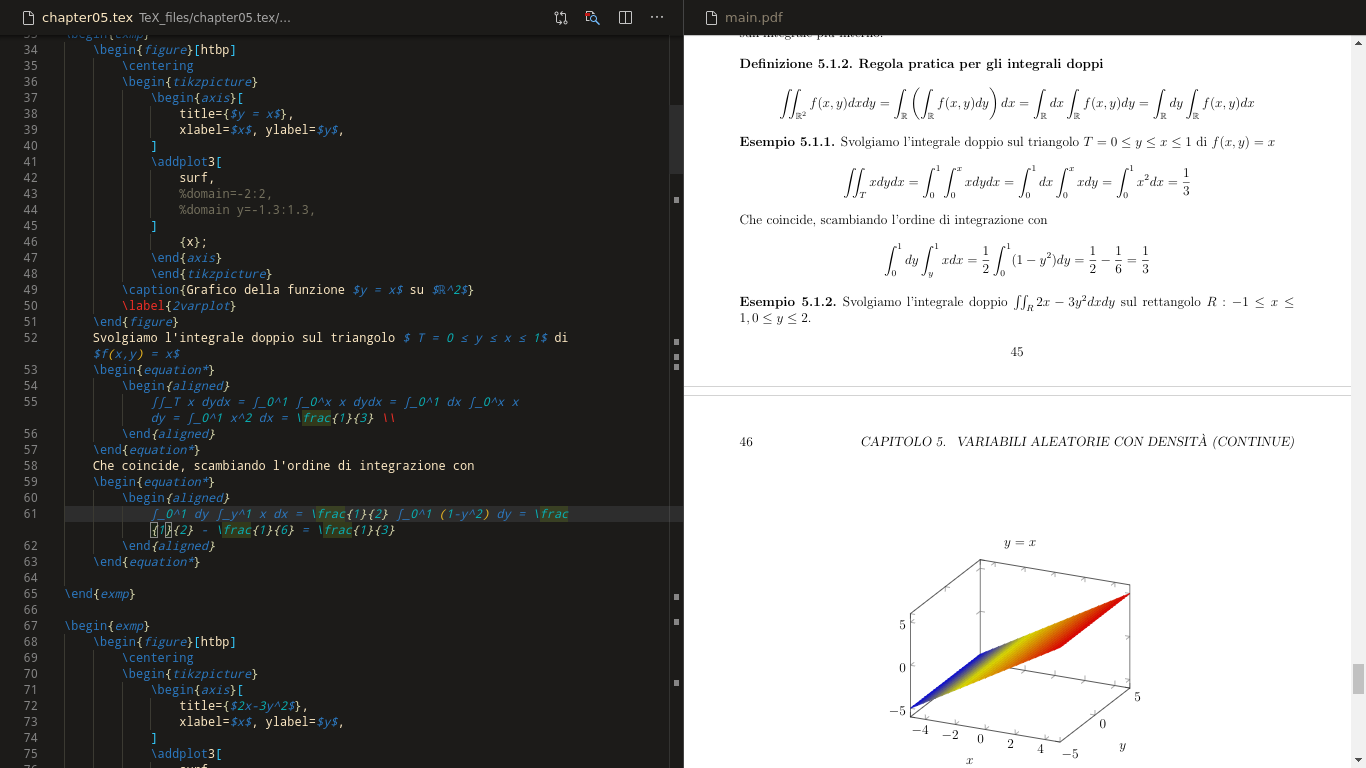 Here is my settings.json file, with the most important section being prettifySymbolsMode.substitutions. In that sections you can specify which identifiers are to be substituted by the "pretty" symbols by the Prettify Symbols Mode extension. When your cursor falls on the prettified symbol, the "real" (ugly) text will be displayed. This is a really useful feature for writing LaTeX because you can replace an ugly command like \alpha with the human readable Unicode character counterpart α in the source code. This make editing mathematical formulas a lot more pleasing than, let's say, writing them in TeXStudio. My settings file contains LaTeX, Haskell and OCaml identifiers with their pretty substitutions.

Find the configuration files in this Github Gist.

If you don't like Visual Studio Code (for ethical or practical causes), or you use another editor you can take a look at other great LaTeX plugins/writing environments: